As we commemorate Saint Oswald, ‘the most Christian king of the Northumbrians’ (as the Venerable Bede styled him), we find ourselves in the world of Saint Columba’s biographer, Adomnán, abbot of Iona; of Aidan, bishop of Lindisfarne; and of Bede, the Church historian. 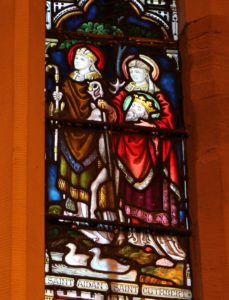 After his father, King Æthelfryth, was killed at the battle of the River Idle in 616, the pagan twelve-year-old Oswald was taken for safety to Argyll, or maybe to Antrim in northern Ireland, perhaps under the protection of Gaels from Kintyre. Having lived half his life among the Gael, he returned to his homeland on the Tweed as a Christian at the age of thirty, taking back the kingship of the Bernicians that his father had lost.

Oswald swiftly achieved dominance over the Deirans to the south, and in the words of Adomnán, became ‘emperor of the whole of Britannia’. For Bede, ‘all the nations and kingdoms of Britannia’ accepted his word, ‘British, Pictish, Gaelic and English’.

Before defeating the British king, Cadwallon, at a battle near Hexham, Adomnán recorded that Oswald had told the abbot of Iona of a vision of Saint Columba that he had received the night before the fighting, in which the saint had told him, ‘Be strong and act manfully. Behold, I will be with thee’, and assuring him of victory.

After his return in triumph, Oswald went forward as king, confident that his conversion to the Christian faith had been the reason for his victory and return to Northumbria. In thanksgiving, Oswald invited his old friend, Ségéne, the abbot of Iona, to send him a bishop so that they could establish a Church together in Northumbria. And so, in 634, Oswald donated the tidal island of Lindisfarne to be a new daughter house of Iona, and Ségéne sent Aidan as bishop to organise this new missionary Church.

Oswald reigned for nine years, killed in battle by Penda, the pagan king of the Mercians. He died on 5 August 642, aged thirty-eight years.

Bede ascribed to Oswald the Christian virtues of faith, humility, charity, and concern to establish the Church. But Bede was writing about Oswald a long time after his death and would have been influenced by the widespread saintly cult of the king that had rapidly developed, venerating him as a holy martyr, killed defending the Christian faith against the pagans. The sanctity not only imbued by martyrdom, but which was later revealed through miracles, was read back by both Adamnán and Bede into Oswald’s earthly life. Whether or not Oswald in fact lived an exemplary Christian life is not a question we can answer. And, in a sense, it doesn’t matter.

Oswald allowed himself to be used by God, providing the circumstances in which the great Christian tradition of Northumbria was founded and flourished, and by which generations of Christians have been nourished ever since.

And so we pray that those responsible for the governance of our nation today will use their authority to encourage the building up of a society on the foundations of the love to which the Church is called to bear witness – the love of God that we know in the life, death and resurrection of our Lord, Jesus Christ.

We are currently in a vacancy.
Our Priest-in-Charge is the Rev Canon Dr Nicholas Taylor.
The Rev David Cameron is maintaining pastoral support.

If you wish to contact us, please email our Diocesan Office for details.